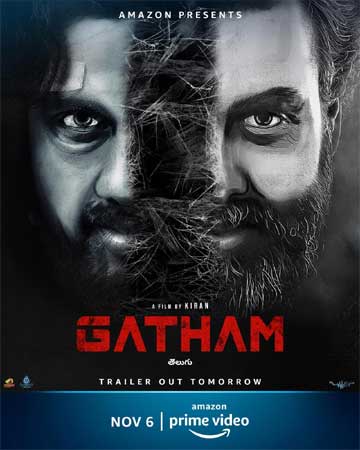 The trailer of Gatham has clicked quite well among the audience. The psychological thriller is all set for a release on Amazon Prime on the 6th of Nov. On this occasion, we caught up with the lead cast Rakesh, Bharghav, and Poojita for an exclusive interview. Here is the transcript.

How excited are you about the film’s release?

We are super excited for the release. Not once did we imagine that our film will release on Amazon. We thought of making this as an Inde film but here we are with such a big release. We are sure that our efforts will not go waste as we all have worked hard on this film.

Tell us about your roles?

Rakesh- I play the person, who wakes up from his sleep and forgets his past. What problems do I face is the story.
Poojita- I play one of the leads and support Rakesh throughout the film to solve his mystery.
Bhargav- I cannot say much about my role but can give you this much that I will be seen in a negative role.

What was the most difficult part while shooting?

Working for longer hours, waking up at 3 am and doing my own make-up, shooting in dense snow was the most difficult part says Poojita. While Bharghav says that he had to lock himself in a room to get the essence of his character right which had dark shades. Finally, Rakesh says that the film has a lot of chases and this took a toll on his physical health.

Working with a young and director like Kiran Reddy?

All three of them say that they have known Kiran for a long time. Both Rakesh and Bharghav have also worked with Kiran in his short films. They say that Kiran is a perfectionist and did not say cut until and unless he got what he wanted from his actors.

Poojita says that she always wanted to become an actor and for that reason, she is back in India and is in plans to even direct a film. Bharghav is married and always wanted to be an actor. He used to ask for roles through his friends and now that he has got that break, he is happy. Finally, Rakesh says that his family has supported him even when he was doing short films in India. Acting is his passion and will surely continue it.

What is so special about Gatham?

All three actors confidently say that the film is a roller coaster ride and will surely arrest you with its narration. Rakesh, who plays the lead says to just sit through the first ten minutes patiently, and then the film will engage you completely. Poojita adds that they have worked so hard to get the visuals right and everyone is young and has given solid content that will speak in itself.