Exclusive Interview: Gunnam Gangaraju- Visually my film will be one of the best on Indian screen
Published on May 13, 2014 6:30 pm IST 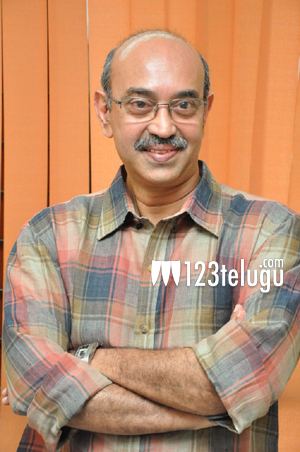 Gunnam Gangaraju is one man who needs no introduction. Known for making different movies like Little Soldiers, Anukokunda Oka Roju, Amma Cheppindi, and the hit serial Amrutham, he is now back with a scientific entertainer in Amrutam Chandamama Lo. We caught up with him for an exclusive interview, and let’s see what he has to say.

Q) Why did you decide to make this film when your serial Amrutham was going so good ?

Basically, I was stagnated by making the same serial again and again. It has been going on from years, and that is when I thought that I should take a leap ahead and makes this as a movie.

Q) How different is your film going to be when compared to the serial?

I have made significant changes to the script. My film is based in space, and I have also casted some young actors to reprise the roles.

Q) The promos have created quite a curiosity. Tell us something about the film ?

Yes! The trailers have done well. We released the trailer on Face Book and got tremendous response for our trailer. The film is basically the same as the serial, but we have now set it in space which made it even more interesting.

Q) Tell us about the budget and the production values of this film ?

We have made this film on a budget of seven crores, and over a period of two years. The entire shoot was done in Hyderabad and special sets were designed for the space set up. It was quite a huge task for us to get the look right. As the story had space and moon, the lighting, sets and specially the camera work had to be spot on.

Q) The visuals look rich. Can you elaborate further ?

I can confidentially tell you that the camera work and visuals in this film, will be the one of the best works on Indian screen..

Q) Why have you changed the star cast when your serial had such popular faces ?

I have changed just two. Srinivas Avasarla and Harsih have come in. This was preplanned as I wanted a young cast for my film to give a fresh feel.

Q) Do you think our Telugu audience will receive science fiction films like these ?

Any film irrespective of story, which is told in a entertaining way will surely be received by the audience.

Q) Tell us about the graphics in this film ?

Our movie has nearly 60 minutes of stunning graphics. The entire space set up, the costumes and most of the film had extensive visual effects and we have not compromised on the production values at all. That is also the reason why this film was in post production for more than nine months.

Q) The promotions look interesting. Can you elaborate on it more ?

Sine our film is unique, we are also doing some aggressive promotions. We will soon launch a comic book about this film which has been never done before.

Q) What is your personal favourite from all the films that you have made?

My personal favourite is Anukokunda Oka Roju, and as a director I loved making Little Soldiers.

Q) Why is there such a long gap for your movies ?

Laughs ! One needs to have such kind of budget also to make movies continuously. I am happy with the way I take time and make my films.

Q) Are you planning to remake any of your films ?

Yes I do have. If this film does well, I will surely make it a franchise and remake it in Hindi.

Q) Do you have any dream project in mind ?

Yes ! I would love to make a big budget film on the life of the famous historic character Abhimanyu.

With that we rounded off the interview with Gunnam Gangaraju and wished him the best of luck for his film. Keep watching this space for the complete updates on Amrutam Chandamama Lo.