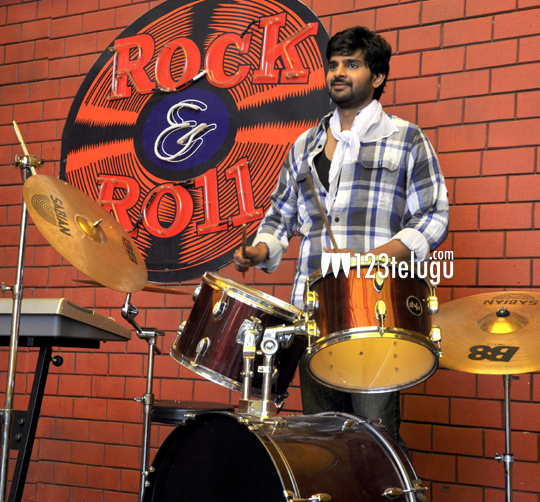 Vishnu will be seen as one of the lead actors in the romantic entertainer ‘Prema Ishq Kadhal’. This young lad is originally from Amalapuram and he has been slowly making his way up in the Film Industry. Vishnu comes across as a very shy and soft spoken guy. He is a huge fan of Victory Venkatesh but he takes his inspiration from the lives of Sr NTR, Chiranjeevi and Ravi Teja. Read on to see what Vishnu has to say

Q. What role are you playing in ‘Prema Ishq Kadhal’?

A. I will be essaying the role of Royal Raju, a wannabe film director. He comes to Hyderabad from Akiveedu. Royal Raju falls in love with a costume designer and he has a nice and humorous love story. My character has lots of entertainment and it has a mass touch.

Q. How did you get this chance?

A. Lyric writer Krishna Chaitanya met me while I was working for ‘Life is Beautiful’. I was selected immediately. Pawan and Krishna Chaitanya worked very hard on the script. When the script was first narrated to me, my role was quite different. I was supposed to play the role of a guy who comes to India from US, in order to become a filmmaker.

Q. What can you tell us about your journey in the Industry?

A. I am originally from Amalapuram, but my education took me across various cities in AP. I have been in the industry since 8 years and I have essayed a number of small characters. My turning point came after I acted in a popular short film named ‘Bewarse’. Director Chowdhary, who made ‘Kodi Punju’, saw my photos and the short film and I was selected for the film ‘Second Hand’. I also acted in ‘Prathinidhi’. Nara Rohith is now producing a movie with me as the hero. This film has been titled ‘Mario’ and Karthik Ghattamaneni is the director.

Q. Did you always want to become an actor?

A. I am a very shy person, so acting was never on top of my agenda. I wanted to be a director and direction really excites me. I was a huge movie buff even as a kid and I spent my Sundays in film theatres. Acting happened quite unexpectedly.

Q. Did you face a lot of issues in the industry?

A. Not really. “Andhariki unde problems ye nenu face chesanu”. When things became a little tough to handle, I think about Sr NTR, Chiranjeevi and Ravi Teja. They made it big in the industry on their own through sheer hard work. So their life and their success is a source of inspiration for me.

Q. Who are your favourite actors?

A. I have been a huge fan of Venkatesh garu right from my childhood days. I watched the film ‘Nuvvu Naaku Nacchav’ 72 times in Vijayawada, continuously from Day 1. Among actresses, I used to like Vijaya Shanthi garu for her action sequences. Later on, it was Soundarya and after that Trisha.

Q. How was your experience with the unit of ‘Prema Ishq Kadhal’?

A. Most of the people who worked for PIK are quite young, so there was a very youthful atmosphere on the set. On the first day, I was quite nervous as a lot of people were watching me intently and that made me very uncomfortable. However, I slowly got into the groove. After the heroine came into the picture, I saw her performance and I was determined to be better than her. That changed everything and I really got into the skin of the character. I received great support from the team and they enjoyed my character.

Q. Do you think ‘Prema Ishq Kadhal’ is a class film?

A. I can’t say if it is a class film or a mass film. All I can say is that it is a very youthful film and it will appeal to youngsters immensely. Karthik Ghattamaneni’s visuals will be a big asset for the movie. He has given the film a whole new colour. There are three independent love stories in this movie and all of them will be liked by youngsters.

Q. What kind of roles would you like to play in future?

A. All three of my films will release over the next few months. After that, audience will give me some feedback. “Veedu idhi chesthene baguntadu. Veediki idhi aythe suit avuthundhi” etc etc. I will listen to that feedback and ensure that I don’t lose their support.

Q. What do you do in your free time?

A. I watch a lot of movies. I make it a point to watch every new Telugu film on the first day itself. Otherwise, that kick is going to be lost.