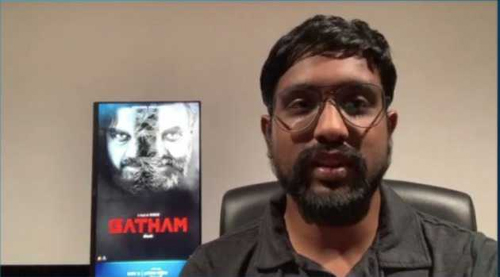 The trailer of Gatham has clicked quite well among the audience. The psychological thriller is all set for a release in Amazon Prime on the 6th of Nov. On this occasion, we caught up with the director of the film Kiran Reddy for an exclusive interview. Here is the transcript.

The film is about a man who comes out of COMA and forgets his past. What he does and how his past related problems trouble him are the basic essence of Gatham. The film is completely shot in the US backdrop and all the actors are new and are working employees. The BGM is by Sricharam Pakala and he has lifted the film to another level. The technical aspects will surely impress many in Gatham.

Did you always plan this as an OTT release?

No, we started this as an Indie film and released the teaser. The promo clicked well and then we changed plans and wanted to have a theatrical release. But lockdown happened and because the teaser went viral, Amazon reached us. They saw the film and in one-day things fell into place and now we are ready with the release.

I wrote this script in 2017. As I was busy, it took me time to start it as a film. We shot this film completely in the US amidst snowfall which is a key part of the film. The pre-production took a lot of time but we gave a lot of efforts as the shoot would be easy for us. The camerawork is stunning and credit goes to my DOP Manoj, who worked hard on the visuals. The film is written, shot, edited, and produced in the US.

I have roots in Guntur but my upbringing happened in Hyderabad. During my graduation days, I got attracted to filmmaking. Cameraman Karthick Ghattamaneni was my senior and they used to have a group that made films. This gave me inspiration and once I landed in the US, my love for cinema grew. It was a tough task to balance work and films but my passion helped to make several short films and Ads here. Gatham is my first feature film and I am super excited.

Do you plan to come back to India and make films here?

I am basically an Indian at heart. There are always insecurities that haunt us and I am happily settled in the US with my wife who has also worked on this film. I have a few things in mind and if everything falls into place post-Gatham, I have surely planned to come back and make films.

The family has always been supporting me and my dreams. My parents and wife have given me the freedom to pursue my passion. For me, it is my work and once I am back home, films are all about I think and make.

So many thrillers are coming out. What’s special with Gatham?

Gatham is one of the finest psychological thrillers and I promised you all those who love this genre will root for this film till the end. The twists and narration are such that it is very difficult to guess the suspense till the end. It will surely impress you according to my belief.

With that, we ended our interview and wished Kiran the best of luck for his film.