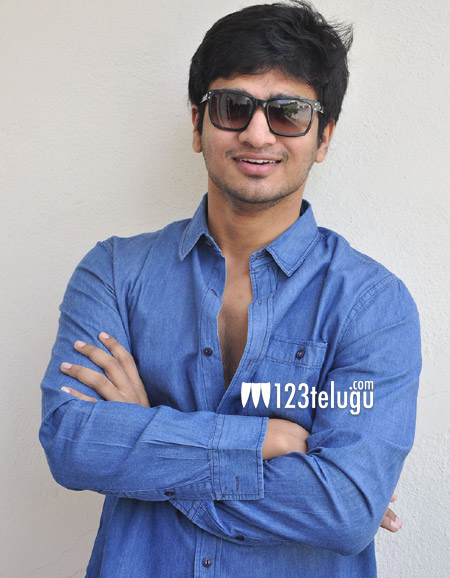 Young hero Nikhil, has been doing some interesting films from the past few years. His latest project is Shankarabharanam which is up for release this Friday. On this occasion, we caught up with Nikhil for an exclusive interview. Let’s see what he has to say.

Q) What is the secret behind giving back to back hits ?

After the huge success of Happy Days, I gave so many flops. These disasters disappointed me big time and also taught me a huge lesson. I went into an introspection mode and decided to only do films which have strong content. The day I decided this, things fell into place automatically.

Q) How do you select your scripts ?

For me story is the key. Each film should be different from my previous release and my character should also have some thing new. I analyze whether the okayed subject will reach the audience or not. If I feel that the selected subject is unique and will impress the audience, I sign that film.

As soon as Kona Venkat narrated me the line, I liked it very much and requested him for a full script. After a while, he gave me a complete narration which was very entertaining. The essence and concept of the film are unique and will entertain the audience big time.

I play an NRI who visits India for the very first time and gets stuck in Bihar. It was quite a challenging role and I observed a lot of NRI’s and spent close to a month in New York for the same.

Q) How was it working with Kona Venkat ?

He never behaved like a star writer on the sets of the film. Interesting aspect is that Kona has a command on many aspects of film making which makes him supremely talented.

Q) Who inspired you to become an actor ?

Right from my childhood, I am a huge fan of Pawan Kalyan and Ravi Teja. I like their ease and body language and wanted to be like them. They were the major reasons for me to join films.

Q) What kind of person is Nikhil in real life ?

I am a very easy going guy who loves traveling a lot. I have also listed the top 100 places to visit in the world and am touring them one by one.

I am doing a film with V I Anand and débutante Kartik Reddy in 2016. Once I wrap these films, I have Katrhikeya 2 with Chandoo Mondeti.