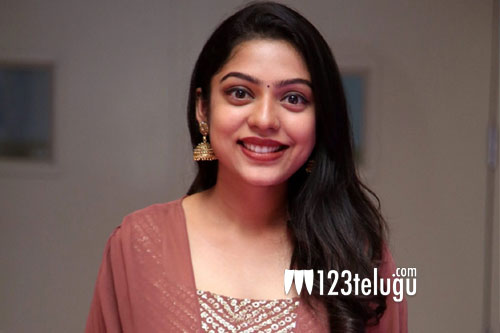 Varsha Bollama, the Tamil actress is slowly but steadily making big strides in Telugu cinema. She is ready with her new film Middle-Class Melodies that will be out on Prime Video. On this occasion, we caught up with her for an exclusive interview. Here is the transcript.

Your debut Telugu film was a flop. How did you feel?

Choosi Chudangane was a good eye-opener for me to understand the way the Telugu audience thinks. Though the film flopped, I was appreciated for my work and natural looks. Jaanu turned things for me and I am so happy that I am getting good work.

The editor of Choosi Chudangane has also worked on this film and he had recommended me for this project. As it was being made y Bhavya Creation and my role was good, I grabbed the opportunity.

About your role and preparation for it?

I am playing a small-town girl called Sandhya who is full of life. But she is scared of her dad and is in love with Anand Devarakonda. The film was supposed to be made in sync sound and I was scared about my lines. But as that was ruled out, I rehearsed a lot to get the Guntur slang correct.

You have done more films than Anand. How was it working with him?

I had seen Anand’s debut film and felt that he was decent in it. But with this film, he will surprise one and all. He has done his role so well and his emotions are perfect in this film. He has lived in his role as a Guntur guy who wants to make it big.

What are the highlights of this film?

More than the characters, the script is the hero and everyone will root for it. The earthy characters and good comedy along with nice drama will keep things engaging. This is the story of any small town guy and everyone can relate to it nicely.

You are doing films in multiple languages. Tell us about that?

This year has been special as I have done films in all four south Indian languages and many say that I look the part whichever role I play in every film. I am here to do all kinds of roles but my character should have scope for performance. Post-Bigil, I have been getting good roles and I am super excited to do good Telugu cinema.

Tell us about your struggling phase?

I have been here for more than five years and struggled a lot. I did many films but things did not click. It was 96 where I was noted a lot. Bigil changed things for me and now, I am getting based on my talent and not looks which itself is a big thing for me.

Did you always want to become an actress? Tell us about your background?

Yes, I always wanted to be an actress since I was four years old. I tried hard and pursued my dream and here I am doing what I Love. Coming to my background, I am from a small town called Koorg in Karnataka and my parents have always been supportive of my work and never interrupted my dreams.

Any stars in the Telugu cinema that you look up to?

Yes, a number of them inspire me big time. Samantha is one actress whom I look up to from the beginning of my career. Also, I am a huge fan of Vijay Devarakonda and would love to work with him one day.

I am doing two Telugu films as of now. One is with Raj Tharun and the other will be announced soon. I just shot or a Tamil film. I have multiple offers in Kannada and Malayalam and keeping my fingers crossed for my career.

With that, we ended our interview with Varsha and wished her all the best for her film.