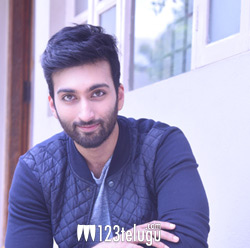 Parichayam an upcoming romantic drama, starring Virat Konduru and Simrat Kaur is slated to hit the screens on July 21st. On this occasion, we had a brief interview with Virat. Here is the transcript.

My native place is Chittoor but was bought up in Bengaluru. My family is not related to films and I’m the first person to try my hand at acting. So after completing my graduation, I came to Hyderabad and started film trails. In that process, I got this offer after seven years of struggle.

Q) What is Parichayam all about?

It’s a sensible love story between a young couple. The film will also have a few beautiful family moments which will attract all sections of the audience.

Q) How did this project roll on?

This film’s director Lakshmikanth is a good friend of mine. Three years back, he narrated me this point and started developing it into a full-fledged script. So, after wrapping up the script work we somehow managed to convince producers and that’s how film kick-started.

Q) Tell us about your heroine Simrat Kaur?

She is a very honest and hardworking girl. As Telugu is not her mother tongue, she used to work on dialogue modulation every day on the sets. Initially, she hesitated to do the film again with a newcomer but after listening to script, she said okay. Hope she will also get a good name with this film.

Q) How is it working with seniors like Prudhvi and Rajeev Kanakala?

Yeah, it was a good learning experience. My first day of shoot happened to be with Rajeev garu. He was very jovial and cheerful on the sets. Prudhvi garu used to give me acting suggestions which helped me a lot to better myself.

Q) Tell us about your director Lakshmikanth?

He is one director who believes in smart work. His strength is comedy genre and our film also has a few nice fun moments but the main USP of the film will be emotion and Lakshmikanth has narrated it quite well.