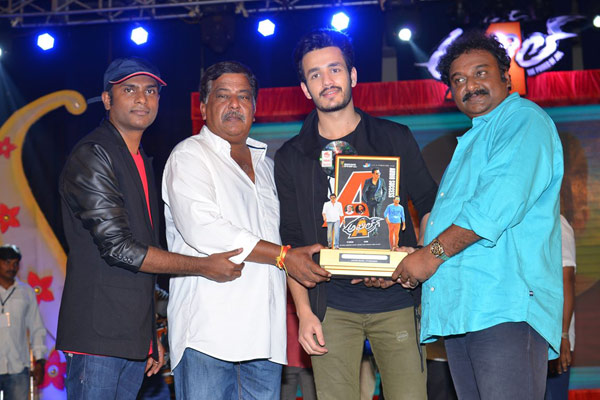 It is a known fact that the Akkineni lad, Akhil is making his debut with the film Akhil. On the eve of the film’s release, we caught up with him for a brief interview. Let’s see what he has to say.

Q) How nervous are you about your debut film ?

I am very excited about my debut film and I am eager to see how the audience will react to my performance.

It is a very different Vinayak film loaded with lots of high octane stunts. I play the role of a guy who falls in love with a girl and the story takes its own course from then on.

Q) How was it working with Sayesha ?

I had a wonderful time working with her. She is a very good dancer and she gave me tough competition in dancing.

Q) What was the reason behind choosing VV Vinayak as your debut film director?

Q) What are the major highlights of Akhil?

The film will have never before seen action stunts. The major highlights of the film are the under water episodes, a fight sequence in the climax and an action episode with a panther.We have used a lot of CG for these three episodes.

Q) Do you have any plans for acting in Bollywood films?

I don’t have any Bollywood plans right now. Firstly, I want to establish my image here and then I’ll think about Bollywood.

Q) Are you ready to do multi-starrer movies?

Yes, I am always ready for doing a multi-starrer, if I find the right story and a good co-star. In my view, the multi-starrers will enhance our Telugu cinema market.

Q) You have mesmerized fans with your dance sequences in the film…Who is your inspiration ?

I never showed off my dance skills so far. So, all the people along with daddy were pleasantly surprised to see my dance skills.While Chiranjeevi garu is my inspiration as a dancer, Prabhu Deva master is my dancing inspiration. Johnny master has taken a lot of care about the dance moments in Akhil.

As of now, I am eagerly awaiting the release of Akhil and I am in talks with few other filmmakers and I’ll announce the details pretty soon. My main goal is to establish myself as a star hero in the industry.