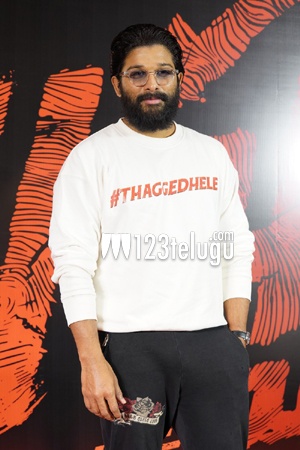 Allu Arjun is busy promoting his new film Pushpa all over. On this occasion, we caught up with him for a detailed interview. Here is the transcript.

How did the pandemic disturb the shoot of Pushpa?

As far as I am concerned, it gave me and Sukumar a lot of time to prepare for the film. I worked on my character and its body language. Both I and Sukumar also discussed various key scenes and only made them better.

What was the most difficult part of shooting for Pushpa?

Shooting in the Maredummali shoot was quite difficult. At least four hundred cars used to go to the location on a daily basis and there were days where only one scene was canned during the weather issues. Making Puishpa was like doing four different films in itself.

How did you prepare for the role of Pushpa?

Sukumar and his team worked hard and gave me a lot of references. A special team from Mumbai designed my look. We took a lot of time to get the look right. As my character also goes through various phases, the costumes, hairstyle, and look had to change and for this, the makeup played a key role. It took close to three hours to don the Pushpa look.

Tell us about getting the slang right?

To play the character of Pushpa, I had to get the slang of Chittoor right at any cost. Not many know that Sukumar changes the dialogues on the set and so you cannot prepare at home. The only way was to learn the language so that I can speak any lines that he gives. So, I worked hard and got the diction right.

Your relationship with director Sukumar?

Sukumar and I go a long way back. He was the one who gave me my biggest hit with Arya. Not many know that I even share my personal problems with him. He exactly knows my strengths and weaknesses and writes roles for me. With years of experience, he has evolved as an actor and did a solid job with Pushpa.

Whose plan was it to release the film in two parts?

Halfway through the film, we understood that the story cannot be told in one film. Both me and Sukumar thought for a while and decided that the film will come out in two parts.

Why are you not promoting the film in Hindi?

We are a bit late with Hindi promotions but the team has planned a special promotional tour in Mumbai on the 16th. Tomorrow, I will be in Bangalore and Cochin and then, will head to Mumbai. On the evening of the 16th, I, Sukumar, and DSP will meet you all again before the release.

I am really fond of Rashmika. She does not throw any tantrums and is a very affectionate girl. I like the way she performs and shared a wonderful journey with her.

About the high court verdict on ticket prices?

This is a very positive sign and everything that helps the film business is always welcome. The industry is slowly coming back to terms with the losses faced and in the days to come, more big films will change the fate of Telugu cinema.

Whose idea was to rope in Fahadh Faasil for Pushpa?

It was my idea to have Fahadh in the film and asked Sukumar to approach him. But I never thought that he would take the offer right away. He too wanted to do a Telugu film with Sukumar and trust me, he has done a terrific role in the film.

About Samantha doing the item number in the film?

I would like to thank her once again for doing this song. Doing an item song at this juncture is a big move and Sam gave her best and did not think one bit and danced her heart off in the song. It will be a big rage once the film releases.

About your huge pan-India image?

I am yet to become this Pan-India star. But I can only say that I need to explore more and want to push boundaries as far as my performances are concerned.