Interview : Divyansha Kaushik – The love that Telugu audiences shower is something very special
Published on Jul 24, 2022 12:00 am IST 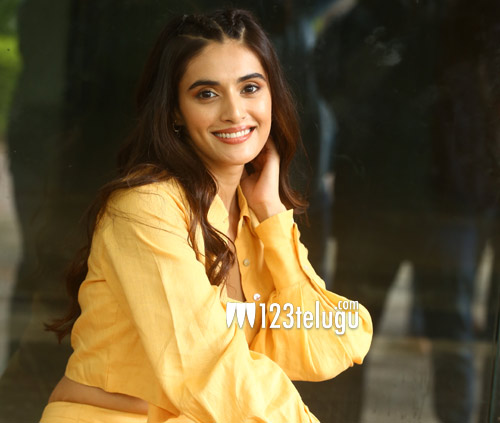 Divyansha Kaushik made her acting debut through Naga Chaitanya’s Majili. Now she is playing one of the female leads in Mass Maharaja Ravi Teja’s Ramarao On Duty which is produced by Sudhakar Cherukuri and directed by Sarath Mandava. The action thriller will be hitting the screens on 29th July. Ahead of the film’s release, the actress gave a media interview sharing her experience. Here is the transcript.

What aspect did you like the most when Sarath narrated the story to you?

Firstly, I am a huge fan of Ravi Teja. I feel respectful sharing screen space with him. I liked my character when Sarath narrated the story. I will be seen in a homely character named Nandini who will be a wife as well as a mother. My character will have lots of maturity. Sarath has a lot of clarity. All the elements one expects would be present in Ramarao On Duty.

How was your working experience with Ravi Teja?

It was a fan moment meeting him. I was very nervous when I first met him. Even before I started talking, he started speaking in Hindi asking where I was from. That made me feel better. It was great working with him. There would be a lot of energy on the sets whenever he was present. We shot in Spain where Germans and Pakistanis came and took a picture with him. He has followers worldwide.

You acted as a bubbly girl in Majili and in a wife role for this movie. What kind of characters do you love to play?

It will be easy portraying a bubbly girl role. But a role like Nandini will give me that satisfaction as an actor. It has got more scope to perform.

What was it like working with the team of Ramarao On Duty?

After a gap of three years, I came on to the sets of a big film like Ramarao On Duty. The entire team encouraged me very well. Director Sarath gave me a lot of freedom regarding acting. He would appreciate my work regularly.

What differences did you find between Bollywood and Telugu industries?

Both the industries will work with a lot of discipline and passion for cinema. The love that Telugu audiences shower is something very special. They loved my role in Majili. I can’t forget their support.

Tell us about the producers?

SVL Cinemas and Ravi Teja Team Works have made this film on a large scale. They have a passion for cinema. They produced the film in high quality without any compromises.