Interview : Nagarjuna The time and situation was not right for audio release.
Published on May 19, 2014 9:29 pm IST 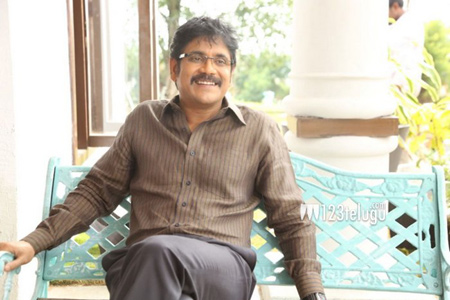 Akkineni Nagarjuna is a busy man these days. His prestigious project Manam, is up for release this Friday, and special premieres have been planned all over. We caught up with Nagarjuna for a detailed interview today and let’s see what he has to say.

Q) How did this project kick start ?

A) As you know, I always wanted to make a film spanning all three generations. Even though I had the idea, I was not liking the scripts that were coming up. Then one fine day, our family friend Sudhakar Reddy(Nithin’s dad) called me up and asked me to hear the script. I heard the narration and liked the line immensely. I told Vikram to prove himself before getting on to this project. He showed me Ishq even before its release, and once I watched the film, I immediately okayed Vikram. We then sent Vikram to my dad, and with a few suggestions of his, the project got materialized.

Q) The visuals in Manam look rich. Tell us something about them ?

A) Initially, I wanted the best cameraman for this project. So, I approached P C Sreeram. As he was busy with some other project we had to let go of him. Then P S Vinod was brought on board, and a lot of work went on as to how the film should look. As the film spanned from 1920 till date, the cameraman was the key point. After a lot of homework, we went ahead and shot this film, and the result is for you all to see.

Q) Tell us about the commercial aspects of this film ?

A) To be frank, I never thought Manam as a commercial film. I just went ahead with my gut feeling and in my entire career, whenever I did a film without much any calculations, those films have always worked, and Manam falls in the same category.

Q) How did you choose the title Manam ?

A) It was dad who choose the title. Initially, Vikram wanted to have a Hindi title Hum, but we went against it and suggested Manam. This was a apt title for our film, and as our three generations were coming together for the first time, the title suited the film even better.

Q) Is this film inspired from any incident or any other film ?

A) No ! this film is a entirely true creation from Vikram, and as there is no reincarnation angle also in the film.

Q) Tell us about ANR’s role in the film ?

A) He plays an important role, and enters the film during the interval time. From there on, he stays till the end of the film, and other characters keep coming and going into the film.

Q) What was the reason for Amitabh Bachchan’s cameo in the film ?

A) Dad was a huge admirer of Big B’s work. So we thought that it would be a fitting finale for dad, by roping in Amitji. Once I narrated the cameo to Amitji, he immediately said that, It is his honor to be in the last film of ANR.

Q) There is also news that Akhil also did a cameo in the film. Tell us something about it.

A) Akshil’s cameo is just a speculation. He was on the sets during the last day of the shoot, and so were all my family members.

Q) Why did you opt out of a audio release ?

A) The time and situation was not right for a audio release. It was tough and emotional time for us, and we did not want to do things for the heck of it. We were emotionally drained, and so we decided to let go of the audio release.

Q) The producer credits comes in as Akkineni Kutumbam. What was the thought behind that ?

A) During the last two months of my dad’s life, we came very close together as a family. It was mainly because of dad, as he imposed all these qualities in us. From now on, any further film made by Annapurna studios will have the producers name as Akkineni family.

Q) How has Chaitanya performed amidst seasoned actors like you and ANR garu ?

A) Chaitanya has done an exceptional job in the film. The way Vikram has molded him is brilliant. He has grown as an actor with this film, and will impress every one.

Q) Tell us about the premiere of the film ?

A) We have planned a huge premiere on the 22nd of this month. The entire media, ANR fans and a lot of industry insiders will attend this event.

Q) Tell us about your future films ?

A) My film with Mani Ratnam has been shelved for now. And I will be doing a film with NTR soon.

Q) How is your new game show Meelo Evaru Koteswarudu shaping up ?

A) We will soon start shooting of the first episode by this month end. I am very excited about the project, and would love to see the lives of people change during my show.