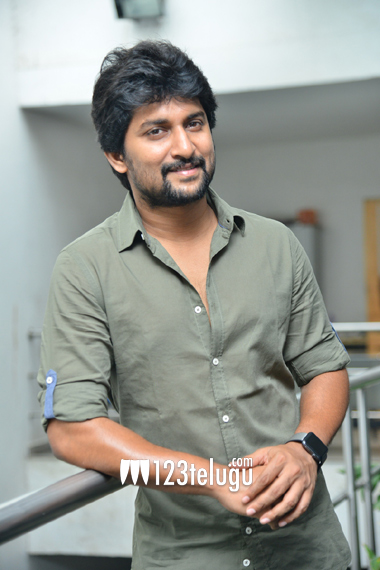 Natural star Nani, is ready with his new film Deva Das which is up for a release tomorrow. On this occasion, we caught up with Nani for a detailed interview. Here is my transcript.

I gave everything for that film and had good hopes on it. But sadly, people did not like it. Efforts wise, I gave my 100% percent and somewhere deep inside, there should be a small hurdle before you grow in life and I felt the failure of this film was that hurdle. I was very much aware of some people who wanted this film to flop as I was giving all hits. I feel that the film’s failure was like a (Dishti) for my career but I have no complaints.

The moment I signed the film, I had a lot of apprehensions in mind as to how Nag sir would treat me and how will our Jodi get along during the shoot. Will, there be any scope for improvisation on the sets and how will he be like a costar. We started shooting with a song and by afternoon, we were in sync. Nag sir is a well-mannered person who always gives scope to the other person. If the audience likes my role tomorrow, most of the credit will go to him as it is because he let me be Das.

What made you choose a multi-starrer?

There is a general complaint that we do not attempt a multi-starrer. When the script came, there was no looking back. In my head, I feel that I am not an image-driven actor to think about my stardom and lineage. Doing films like these will bring more stories and me getting a chance to act beside Nagarjuna whom I have idolized since my childhood was a dream come true. Upon that, when a banner like Vyjayanthi is making this film, there is no question of leaving the project.

This story was there with Vyjayanthi for a long time and we couldn’t find a right director. Then, I happened to see the trailers of Samantakamani and Bhale Manchi Roju and liked Sriram’s work. We called him and asked him to come up with a final draft. The moment he narrated me the full script during MCA shoot, I loved it and sent it to Nag sir. Even he liked the story and the film was on. Sriram is a very capable director and has handled both of us in a superb manner.

What can we expect from the film?

Apart from a full-on fun ride, there are beautiful emotions in the film which will give you superb entertainment. Our chemistry is the major plus for the film as both our roles will look lovely on screen.

What’s the status on your upcoming film Arjun?

I play a batsman in the film and have already started practicing for the same. Daily, I practice for close to three hours as my role demands all the techniques that a batsman needs to have. Arjun is the most prestigious film in my life and I am very excited about it as the making, star cast and set up is quite big and will be a game changer in Telugu cinema.

Has Bigg Boss changed you as a person?

Yes, so much. I used to be in my own bubble feeling that people around me are very good and soft-spoken. The various responses that I have been coming towards me have not only left me surprised but have given me a new perspective on life. These three months have been really life-changing.