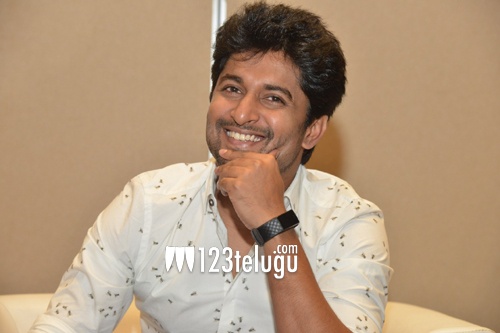 After skipping its theatrical release due to the volatile situation caused by the lockdown, hero Nani’s latest family entertainer, Tuck Jagadish, is all set to premiere on Amazon Prime Video tomorrow (Sep 10) as a Vinayaka Chaturthi treat. As part of the promotions, Nani interacted with the media earlier today. Here’s an excerpt from the interview.

Q) How did Tuck Jagadish materialize?

A) I was dubbing for some movie back then. Shiva Nirvana’s Majili released those days and became a huge hit. When he called me up and wanted to narrate a script, I just wanted to meet him personally, listen to the plotline and then turn it down politely. But when Shiva narrated a crucial scene with Nasser sir’s dialogue, I was bowled over completely. Emotions are Shiva’s main strength. I thought he will take the emotions in Tuck Jagadish to the next level, and immediately agreed to be part of his film. It’s an authentic Telugu movie and shows true Telugu emotions.

Q) What was the idea behind Tuck Jagadish title?

A) Shiva usually comes up with realistic characters and names that we commonly see and hear in our families. That itself creates an emotional bond. There is a scene in the film’s second half which explains why Jagadish always tucks his shirt in. Shiva has scripted that scene beautifully. Audience will know the idea behind the title when they watch the movie.

Q) How crucial are Ritu Varma and Aishwarya Rajesh’s characters?

A) Ritu plays my love interest. Whenever she appears on-screen, she brings in a breather and changes the tone of the narrative. Aishwarya Rajesh’s role will hold the emotions in the story. She played my cousin in the movie. Ritu and Aishwarya never share screen throughout the movie.

Q) Many stars are doing remakes these days. Do you have any plans to act in remakes?

A) No, I will never act in a remake again. I did Bheemili Kabaddi Jattu and Aaha Kalyanam in the initial days of my career. I want to create a genuine emotion and explore and invent myself in a new way with each movie. Let’s tell a genuine Telugu story and the world will watch it and remake it.

Q) Do you have any plans to act in pan-India movies?

A) We are hearing a lot about pan-India movies now. But I believe that we will not hear about pan-India movies in 2 years from now. The trend is changing rapidly. I never used to watch world cinema in the past. But I now watch French Cinema with English subtitles. Take Money Heist for example. They have dubbed it in English. But I prefer to watch the original. This trend will only catch up pace and audiences across the world will be watching a good film from anywhere in its original version.

Q) Can we expect OTT movies and original series from you?

A) No. I am a complete film fan. I love to watch a movie with a proper beginning, middle and end. I believe that no screening platform can match the high the big screens offer. In fact, I felt very bad when I came to know that Tuck Jagadish will not have an interval card.

Q) Tell us about the films coming out from your production house?

A) HIT 2 with Adivi Sesh has completed 70 percent of its shoot. It’s coming out very well. We are also planning to come up with HIT 3 in future and make it a franchise. I’m also producing Meet Cute. It’s ready for release on a digital platform. It’s a beautiful film and also very special for me since it’s my sister’s debut film as a director. I am very proud of both these movies.

Q) Tell us about your upcoming movies?

A) Shyam Singha Roy is being planned for a year end release. It will be a memorable film in my career. Ante Sundaraniki is into its third schedule, and it’s a full-on love story and it will release next year. I want to tell the exhibitors that I am readying my films at a fast pace and that I will flood their theaters with back-to-back movies once the situation returns to normalcy.

In a touching gesture, Nani concluded the interview wishing the makers of the Friday releases, Seetimaarr and Thalaivii, a grand success.