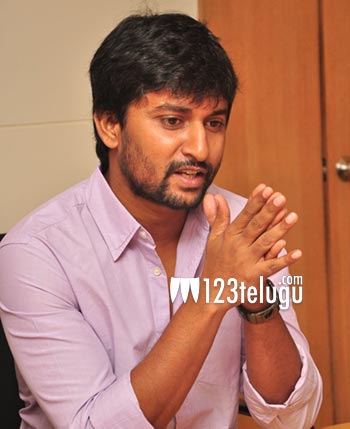 After doing some out of the box films, talented actor Nani is back with a hilarious entertainer Bhale Bhale Magadivoy. On the eve of the film’s release, we caught up with Nani for a detailed interview. Let’s see what he has to say.

Q) What attracted you towards Bhale Bhale Magadivoy ?

I liked the way Maruthi narrated me the script and was completely laughing throughout his narration. The concept of memory loss which was told in a very entertaining manner attracted me even more.

Q) Did you have any reservations regarding Maruthi’s image while okaying the film ?

Yes ! Initially I was apprehensive and reluctantly heard the script. Once I okayed the film, I had no reservations about Maruthi and his image. In fact, you will see a new Maruthi with BBM as his entertaining narration will impress everyone big time.

Post Yevade Subramanyam, there is a positive vibe and everyone wants me to do good in my career. My sister saw the film and liked it immensely. Generally, she is my hardcore critic and tells me right away if she does not like my films. So her positive verdict gave me a lot of relief.

Q) How was it working with both Geetha Arts and UV Creations ?

Aravind garu, Maruthi, Bunny Vas and SKN looked after me supremely well. It is a very good sign that two big production houses are coming together to make a medium budget film which is a healthy sign for the future and industry.

As said earlier, I have a slight memory loss and what all problems do I face because of it is the entire story all about. I had a lot of fun doing this character which is also close to my personal life. I tend to forget things quite easily.

Q) How did you deal with your recent failures ?

If you observe closely, I have done twelve films till date and at least eight to nine of them are decent hits. But surprisingly, audience only remembers my recent flops.

Q) What did you learn from films like Paisa, Aha Kalyanam and Jenda Pai Kapiraju ?

I loved working on those films but they did not do well. I clearly understood that the audience is expecting more entertainment from me with interesting characters.

Q) So, will you stop experimenting from now on ?

I wont say experimenting but I will do more films which have good entertainment values. I have started working on the same and also signed some interesting films.

Q) Tell us about the music of the film ?

Gopi Sundar’s music is quite good and has caught on well. He is a huge asset to the film and will be the next big thing in Tollywood ?

Q) Rajamouli and his family always promote your films. Why is that ?

They have never promoted any of my films. I cannot approach them and tell please say a few good things about my film. If Rajamouli sir likes my film or its trailers genuinely, then only he will tweet about it or call me and congratulate. The only support they show is by watching my all films first day first show.

My next film with 14 Reels is half way through. I play a hardcore Balayya fan in the film which has an interesting premise. Jai Balayya is not the title as publicized by one and all.