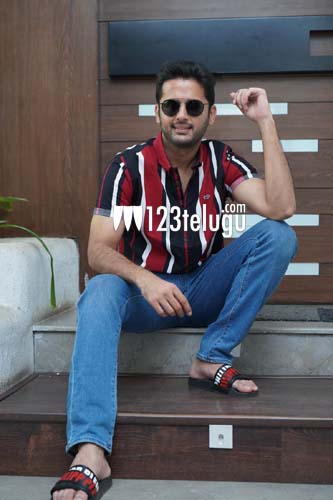 Nithin is back with yet another film called Check that is directed by Chandrasekhar Yeleti. The film will be out this Friday, and on this occasion, we caught up with Nithin for a detailed interview. Here is the transcript.

What made you accept Yeleti’s Check?

I was going through a lot of flops and wanted to change the way I do films from now on. That is the moment, I signed Bheesma and wanted to do a really different film after that. Yeleti came to me with Check, and I okayed it right away.

I went to the sets with an open mind and did what the director said. I had to unlearn a lot during the making as Yeleti garu has a unique way to direct films. I can happily say that the audience will see me in a very different manner for the very first time.

Did you even play Chess in real life?

I never used to play Chess when I was a kid but when the film came to me, I am started playing at home with my wife. Then on the sets, I used to play a lot just to be in the character.

How is your wife reacting to your film career?

She is happy with whatever I do. I do not discuss work at home but my wife is happy with Check as she has watched it already. Frankly, I do not want to take films home and am planning to keep my personal life simple.

Are you not scared of risking with an offbeat film?

Times have changed and it is high time actors like me try something different. The OTT culture is in full swing and this is the time one should risk. Films like Uppena and Nandhi are being accepted big time and I hope that the audience will also accept Check.

Are you not bored of doing romantic films?

Yes, I am bored of doing such films. I can say that Rang De is my last film in the romantic genre. I am tired of being called the lover boy and want to become a performing actor as of now. It is high time I break the mold and that is the reason, I am doing Powerpeta next.

The remake of Andha Dhun is halfway through and Powerpeta will start in May. Powerpeta is the most prestigious film in my career where I play different age groups. It will be made in two parts.

You have completed 19 years in the industry. How do you feel?

It has been a bumpy ride so far and I need to thank my fans and media for keeping me afloat. Now that I am married and settled in life, I want to do different films. I am okay with doing negative roles, multi-starrers and am open to doing crazy projects as well.