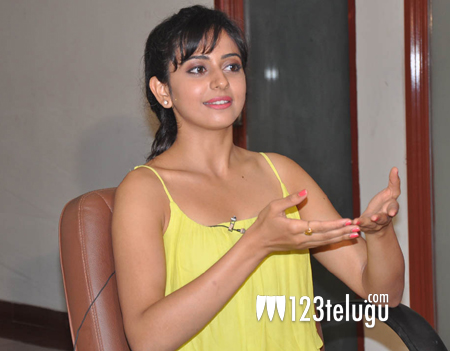 Rakul Preet Singh in on a roll these days. With more than half a dozen films in her hand, she has become the flavor of the season. Her latest release is Loukyam alongside Gopichand. On the eve of the films release, we caught up with Rakul for a detailed interview. lets see what she has to say.

Q) Tell us about your character in Loukyam ?

I play the character of a dons sister called Chandrakala in the film. My character is quite bubbly, and has huge scope to do lot of comedy and romance.

Q) How was it working with director Srivas ?

He is one such director, who has a lot of clarity in what ever he does. He has presented me quite beautifully in the film, and his direction is going to be a major highlight in the film.

Q) Tell us about you co-star Gopichand ?

Gopi is such a wonderful co-star, and I had so much fun working with him. He makes everyone cheered up on the sets, and our chemistry has come out extremely well on screen.

Q) The songs have caught on quite well. Tell us something about the music album ?

Aunp is currently on the top of his game, and has given us wonderful music. Soodu Soodu and Pink Lips are my favorite tracks. Music will be yet another highlight of this flick.

Q) Did you ever expect that Venkatadri express would become such a huge hit ?

I always had a feel that the film, and my character would be liked by everyone. But I never expected that the audience would love the film so much, and make it a blockbuster.

Q) You are shooting for back to back films. How are you managing yourself ?

Yes ! I am shooting in multiple shifts for three films in a day. I am loving my work, and the day I do not have any shoot, I get pretty upset. Being busy feels great always.

Q) You are doing films even in Bollywood. Which is your priority ?

I have got good recognition in Tollywood, and have lot of offers in hand. There is nothing called priority. Which ever language I act, I will get my best and try to impress the audience.