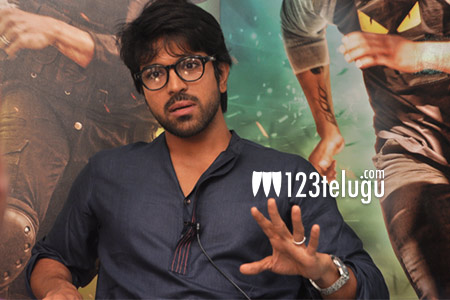 Ram Charan is all set to entertain the audience with his action entertainer Bruce Lee. On the eve of the film’s release, we caught up with him for a detailed interview. Let’s see what he has to say.

Q ) Why did you name the film Bruce Lee ?

As I play a stuntman in the film, we thought it would be an apt title. But later on, we had our doubts as to how would the family audience receive this title. To our good luck, everyone is quite happy about the film’s title and anyways Sreenu Vaitla’s films cater to everyone.

Bruce Lee is a stylish action entertainer with complete brother sister sentiment. As soon as I heard the script, I connected to it immediately and agreed to do it.

Q ) Sreenu Vaitla’s films have his trademark comedy. How different will it be in Bruce Lee ?

This time around, we tried to generate fun through the story itself. All the comedy scenes are quite situational and will entertain the audience big time

Q ) The film was wrapped in no time. Tell us about that ?

Yes ! we wrapped the film in quick time. The entire credit should go to my team for working so hard. Right from the day one we had our release date in mind and worked towards that.

Q ) Tell us about Chiranjeevi’s cameo ?

There was a special cameo which we wanted a big hero to do it. But sadly, it didn’t work out at the last moment. At this moment, dad himself came forward and said that he would do it. I was not at all interested but both Sreenu and dad convinced me big time. I saw some of the rushes and dad looks superb in his role.

Q ) You are the on responsible for Sreenu Vaitla and Kona Venkat’s patch up. How was that possible ?

I always felt that Sreenu Vaitla and his writers are a deadly combination and should work together as a team. What ever we do is for the betterment of the film.

Q ) Tell us about your upcoming projects ?

I am remaking Thani Oruvan in Telugu. Also, I am planning to do a film with Gautam Menon.

I will make an official announcement on the 16th of this month. The film will go on floors in January and I will be taking care of it personally.