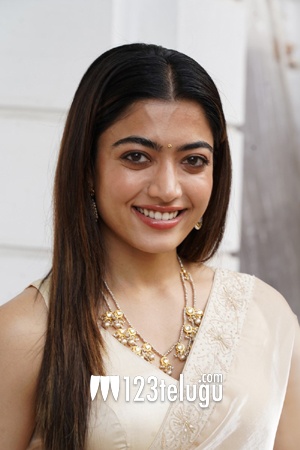 Pushpa is up for a release on the 17th of this film. On this occasion, we caught up with heroine Rashmika for a detailed interview. Here is the transcript.

I am not nervous but am super excited to see how the audience will react to our labor of love. We have worked so hard on the film and are confident that the film will be a huge hit.

For the first time in my career, I play a very de-glam and raw role named Srivalli. She is the love interest of Pushpa and how she forms the core aspect of his life is my basic character.

It was a daunting task to get my look right. I went for three look tests and all of them were rejected by Sukumar. Finally, we created a new look and it was okayed. Then, I had to get the Chittoor dialect right for which I trained a lot. I did not know much about the role but went ahead only because of Sukumar sir’s presence on the sets.

Working with the likes of Allu Arjun

During the pre-release event of Geeta Govindam, Bunny came as a chief guest. That moment I thought will I ever get a chance to act opposite a star like him. Now, I got a chance and am also promoting the film along with him. This is a huge honor for me and I have only learned so much from his dedication and craft.

Sukumar sir has done a solid job with the film. He has created a new world with Pushpa and has showcased Allu Arjun in a super manner. More than the entertainment, the drama in the film is going to be super special. I remember the day when Sukumar sir told me that he roped me because of my talent and not looks.

Dancing with the likes of Allu Arjun?

In Pushpa, I did not get much chance to dance with Allu Arjun. So, there are not many crazy steps that were planned with Bunny. In fact, I want to do a real dance number with Allu Arjun very soon.

You are now part of some big projects. How do you select your films?

I have done a lot of hard work in my career. All of it is now paying off. I select films which have good roles for me. One should have a pinch of luck to be successful in life.

About your Bollywood career?

I have three biggies lined up in Telugu. But due to my contract, I am not supposed to reveal the names. In Hindi, I have two more films ready for release.