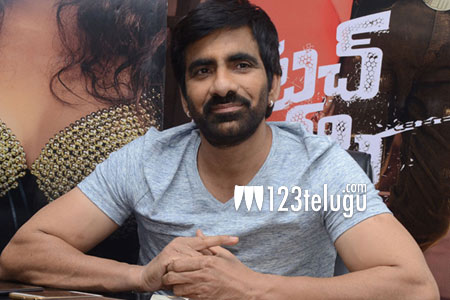 Hero Ravi Teja’s latest movie is an out-and-out mass action entertainer, titled Touch Chesi Chudu. Also starring Raashi Khanna and Seerat Kapoor, the film has been directed by debutant Vikram Sirikonda. The film is all set for a grand release on February 2. On this occasion, we had a brief chat with the Mass Maharaja. Here is the transcript.

A) All the cop characters I had played in the past were quite serious in nature. But my character in Touch Chesi Chudu is quite fun in my typical style, apart from being sincere.

Q) Were you ever apprehensive about the debutant director?

A) Vikram is not new to direction. He has worked as an Assistant Director on many movies. I have always been confident about his abilities. He totally lived up to my expectations.

Q) Tell us about your heroines?

A) Seerat will be seen as a modern girl and her character dominates my character in a few scenes. Raashi played a fun character.

Q) There seems to be a lot of confusion about the film’s music composer. Will you please clarify?

A) Pritam Chakraborty has scored the music. He owns a band named JAM8. We have taken the songs from them. All the songs have become a good hit. And Manisharma’s background score needs no explanation. It’s terrific.

Q) Will you attempt different stories in future?

A) Naa Autograph, Nenithe and Shambo Siva Shambo had different stories. But nobody watched them and the movies were commercial failures too. That’s why I’ve been doing my kind of movies. However, audiences have changed now. I will surely try out new stories in future.

Q) Any plans to act in other language movies?

A) Yes, I do. But I am not finding a good script. I’m waiting for the right project.

Q) What happened to your project with Puri Jagannadh?

A) We both are quite busy with our own commitments at the moment. We will surely collaborate on a project in 2019.

A) I’m currently doing a film in Kalyan Krishna’s direction. We have already wrapped up 25 per cent of the shoot. I’m quite happy with the way the film is turning out. Apart from this, I have also signed a movie with Sreenu Vaitla.

Q) When will you make your directorial debut?

A) Not at the moment. But I will surely realize my dream of becoming a director someday. However, I will not act in my directorial venture and cast some other hero in the movie.

Q) Finally, what will you tell the audience before TCC’s release?

A) TCC is a complete family entertainer. Parents, kids and the entire family will thoroughly enjoy the movie.