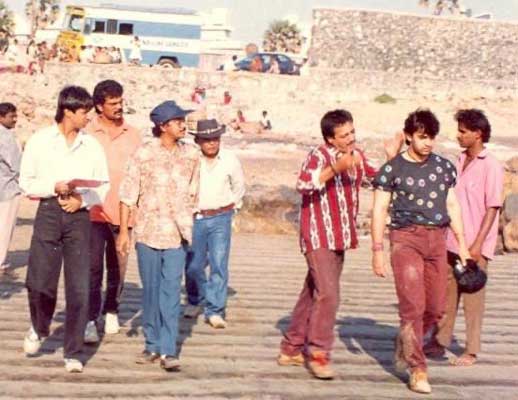 RGV has been in the business for a long time now. He has made some path-breaking films and one of them is his film Rangeela. This was the film which made him quite famous in Bollywood.

The film had superstar Aamir Khan and Urmila as the main leads. The film has completed 25 years and on this occasion, RGV posted a super picture from the sets of the film.

The picture has some of the top names in Bollywood. On the right to RGV(wearing a blue cap) is noted director Madhur Bhandarkar, who was then assistant to RGV.

Also seen is Aamir in the scene along with his co-star. The film ran to massive success and put Urmila as the top heroine in the industry.

My assistant at that time ⁦@imbhandarkar⁩ to my right , me in the blue cap , Dop W B Rao wearing hat , actor Rajesh Joshi in red and ⁦@aamir_khan⁩ on location shoot for RANGEELA pic.twitter.com/syOiKHHsMY