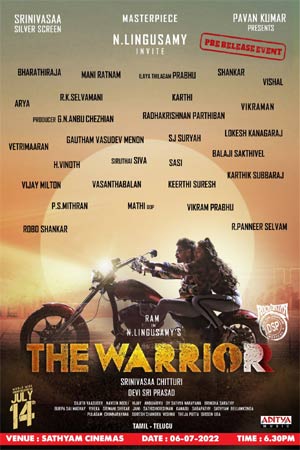 Young hero Ram Pothineni is all set to entertain audiences with his next flick The Warrior. The film will have a simultaneous release in Tamil and Telugu on 14th July. As part of Tamil promotions, a grand pre-release event is planned at iconic Satyam Cinemas, Chennai tomorrow from 6:30 PM. Now makers gave the list of celebrities who would be attending this event which surely will blast our minds.

Almost all the prominent Tamil directors and celebrities are gracing the event and this is an enormous and massive launch planned for Ram in Tamil by director N. Linguswamy. This star-studded event will give the movie much-needed hype in Tamil and it is sure to get very good openings.