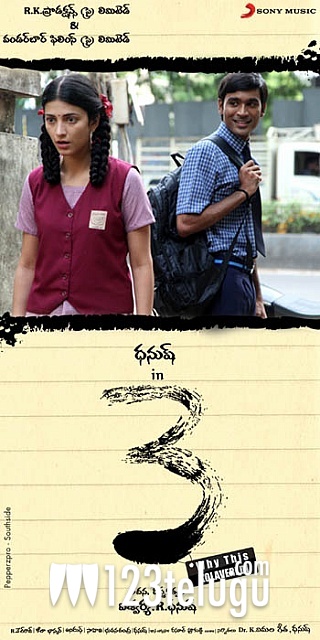 Dhanush, Shruti Haasan starrer 3 is set to release in as many as 700 theatres in Andhra Pradesh alone. Natti Kumar, who had bought the dubbing rights of the film at a fancy price, seems to be going all out to screen the film in maximum possible theatres. “We are planning to release the film 700 theatres across the state on March 30. It means that 3 will get a bigger release than most big budget film featuring a top Telugu star. The music album has got a very good response from everyone and 21 year old Anirudh has given excellent music for the film. We are planning to host a premiere show on March 29 and the film’s cast and crew are expected to attend the event,” Natti Kumar told the media. He also revealed that someone has been trying to pose hurdles for the film’s release. “We had got South India Film Chamber’s approval for the film’s title. Despite this approval, R K Productions tried registering the title ‘3’ to create problems for the film’s release. However, the issue has now been solved,” Natti Kumar stated. Aishwarya Dhanush has directed the film and it’s said to be an intense love story. Anirudh Ravichandran is the music director.