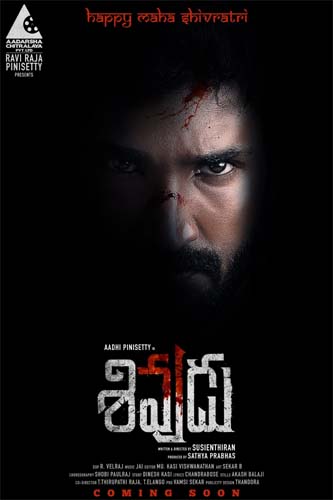 The makers of hero Aadhi Pinisetty’s new film have just unveiled the film’s title and first look poster. The film has been titled Sivudu and it’s only apt that the makers chose the auspicious Maha Shivaratri to unveil it. Aadhi looks fierce in the poster with injuries to his head and nose.

Sivudu is going to be a straight Telugu film and it’s said to be a rural entertainer laced with action, drama and suspense elements. The film will be directed by Karthi’s Naa Peru Siva and Vishal’s Palnadu fame Susienthiran, while Aadhi’s elder brother Sathya Prabhas is producing the film under Aadarsha Chitralaya Pvt. Ltd. Yesteryear successful filmmaker Ravi Raja Pinisetty is presenting it.

Young beauties Nikki Galrani and Akanksha Singh are the heroines, while Sunil, Harish Uthaman, Kancharapalem Raju, JP, Shatru and others will be seen in crucial roles. Sivudu is in last leg of post production. The film is gearing up for its release soon.