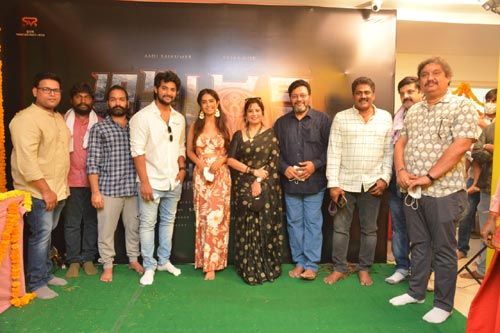 Hero Aadi Saikumar and young actress Avika Gor are going to share screen space with each other for the first time. Titled Amaran In The City – Chapter 1, the film had its muhurtham ceremony earlier today, with the core team gracing the occasion. While Gemini Murthy switched on the camera, Aadi’s father and senior artiste Saikumar sounded the clapboard and Veerabhadram Chowdary did honorary direction.

Amaran In The City – Chapter 1 is touted as a suspense thriller laced with fantasy elements and it will be high on VFX. In the movie, Aadi will be playing a never before seen role with a comic touch. Noted actor Krishnudu, Aditya Om and Manoj Nandan will be essaying key roles.

S. Balaveer is making his directorial debut. The makers spent nearly 2 years on pre-production work, to make Chapter One as a memorable experience. SVR will be producing the film under SVR Productions PVT LTD. The prestigious Gemini banner is presenting the film. Chaitanya will compose the soundtrack.