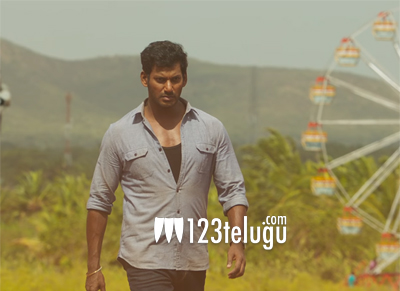 Thanks to Abhimanyudu’s super success, Vishal’s upcoming rustic mass entertainer, Pandem Kodi 2, is now a hot cake in trade circles. The film’s theatrical trailer was out yesterday and it promises enough potboiler elements in the story.

Meanwhile, the latest update is that buyers from all areas are showing interest in Pandem Kodi 2 and are ready to acquire the distribution rights for fancy prices. Reports reveal that the business for Andhra Pradesh and Telangana will close for Rs 11 to 12 crores, which is a very smart deal for a dubbing film.

Happening beauty Keerthy Suresh will be seen as the female lead in this film. Noted Tamil director Lingusamy has directed Pandem Kodi 2 and Vishal himself has bankrolled it. Tollywood producer Tagore Madhu is releasing the Telugu version. Pandem Kodi 2 is scheduled for an October 18th release.