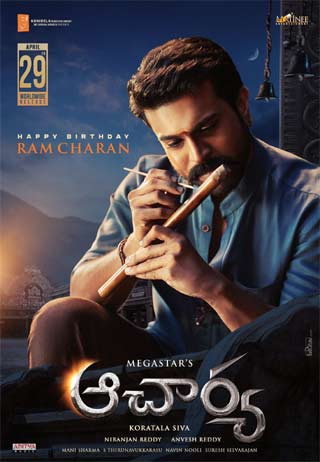 Tollywood star hero, Mega Powerstar Ram Charan has once again proved that he is a phenomenal actor with his terrific performance in RRR. On the other hand, the mega hero will be seen in a crucial role in Megastar Chiranjeevi’s Acharya.

The young actor turned another year older today and the makers of Acharya have released a special poster to mark his birthday. The poster showcases the smiling Ram Charan who holds the flute. The poster has impressed the audience.

Pooja Hegde will be seen as the love interest of Ram Charan in this action drama. Kajal Aggarwal also played a lead actress in this flick, directed by Siva Koratala.

Produced by Konidela Production Company in association with Matinee Entertainment, the movie is scheduled to hit screens on April 29, 2022. Manisharma has composed the music of the movie.