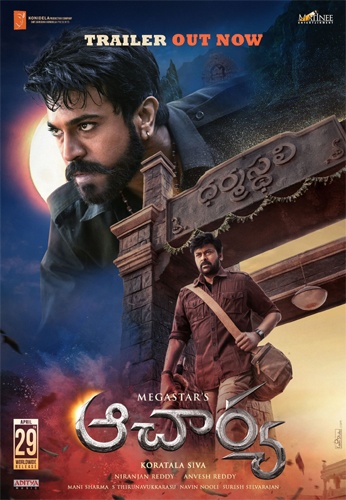 The day which we were waiting for is finally here as the mega trailer of Acharya is out in the open. By the looks of it, Koratala Siva has made sure that the film is grand in every which way.

The promo starts with a simple yet serene entry of Charan and Pooja Hegde. But the manner in which he sets up the entry for Chiranjeevi’s character in the backdrop of Dharmasthali is so good to see.

On the other hand, megastar Chiranjeevi’s entry, his swag, and the underlying emotions in the social drama have been showcased in a good manner. Mani Sharma’s BGM is also pretty good and elevates the scenes.

But the trailer goes to another level with the glimpse of Charan and Chiru being showcased in a solid manner. The father-son screen presence looks good and the action elements showcased are solid.

Koratala has made sure that there is enough drama in the film. It has been quite some time since we have seen Chiranjeevi in a mass avatar and he kills it with his attitude and screen presence.

With the trailer having good emotions and star power, it will surely go to the next level in the days to come. Acharya releases on the 29th of this month.