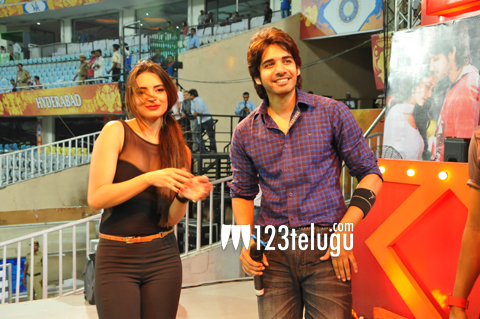 The audience at the stadium got the first feel of the title track from the soon to be released Telugu film ‘Adda’ sang by Baba Sehgal.

Actor Sushanth said “its awesome to perform in front of such a charged up cricket fans. It raises our adrenaline to dizzy heights. I am sure they loved as much as we loved it.

Swetha Bharadwaj who did the special song with Sushanth was super excited performing the title song live with Sushanth. It was a scintillating song and dance combo that electrified the match ambience.

It is the second time Singer Baba Sehgal is singing for sushanth after ‘chorichori’ song he sang for Sushant’s first film Kalidasu.

ADDA title track is composed by Anoop Rubens who belted out hit albums one after the other like Ishq and Lovely. He has also given the background score to the Bollywood film Buddah hoga tera baap.

Actor Sushanth added the music in the film is novel and the choreography is superbly done. I am super excited with the response we got from this huge cricket frenzy people in the stadium. And, I hope it will stir the same vibrancy in theatres too.

Producer of the film Chintalapudi SrinivasRao, A. Naga Susheela, director SaiKarthik Reddy, lyricist of the title song Krishna Chaitanya were also present in the stadium to support the trio Sushanth, Baba Sehgal and Shweta. The movie has Actor Sushanth and Actress Shanvi in the lead.