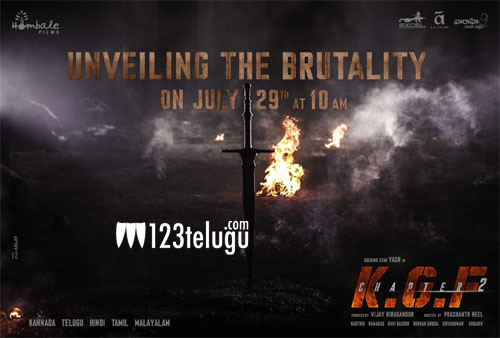 We had recently reported that the first look poster of Bollywood star Sanjay Dutt as the mighty and menacing Adheera from KGF Chapter 2 will be out on his birthday on July 29. Confirming the news, KGF makers have just released a horrific pre-look poster to announce that Adheera’s brutal look will be out at 10 am on July 29.

Following the humongous success of KGF Chapter 1 across the country, expectations on Chapter 2 are sky-high among fans and trade circles. The film will be releasing for the big Dasara festive season in Kannada, Telugu, Tamil, Malayalam and Hindi. Sreenidhi Shetty is the leading lady in this high budget period gangster drama.

Prashanth Neel is helming this highly-anticipated pan-Indian film and Hombale Films banner is bankrolling the project.