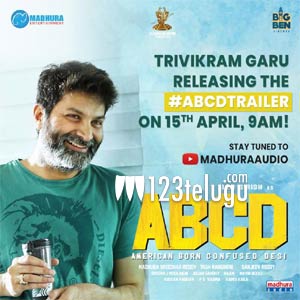 Trivikram Srinivas is all set to commence his much-awaited film with Allu Arjun in a few days. Expectations on AA19 are quite high among the Stylish Star’s fans. Meanwhile, the star director is chipping in to support Allu Arjun’s brother Allu Sirish. Trivikram will be launching the theatrical trailer for Sirish’s soon-to-release film, ABCD, tomorrow (April 15) at 9 AM.

ABCD is an official remake of Malayalam star Dulquer Salmaan’s 2013 hit, ABCD (American Born Confused Desi). Rukshar Dhillon will be romancing Sirish in the movie. Sanjeev Reddy has directed the film, while Pellichoopulu co-producer Yash Rangineni and Madhura Sreedhar are the producers. The film opens in cinemas on May 17.