After Love Story, all eyes on Most Eligible Bachelor’s trailer
Published on Sep 29, 2021 6:58 am IST 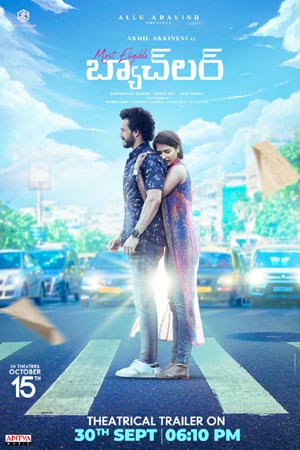 Akkineni fans are overjoyed with the much-needed success of Naga Chaitanya’s Love Story. The film not only gave a boost to Chay’s career but also revived the film exhibition industry to an extent. Now, all eyes are on Chay’s brother Akhil’s upcoming romantic entertainer, Most Eligible Bachelor.

Most Eligible Bachelor’s theatrical trailer will be out on September 30 at 6:10 PM. And the film is slated for its theatrical release on October 15 as a Dasara festive treat. MEB’s success is quite crucial to Akhil’s career, and fans are hoping that the young Akkineni hero will continue the success streak initiated by Chay. Needless to say, MEB’s trailer will give a clear indication of the film’s box-office prospects.

Starring Pooja Hegde as the female lead, Love Story is directed by Bommarillu Bhaskar and produced by Bunny Vas and Vasu Varma under Allu Aravind’s presentation. Gopi Sundar has composed the music.