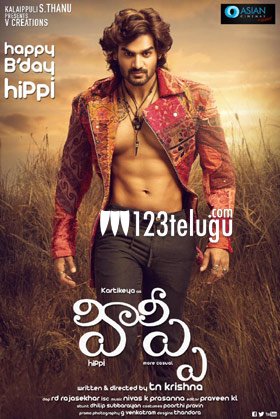 Young hero Kartikeya had played an intense role in the blockbuster romantic drama RX 100. Just like his role, even the film was pretty intense. However, movie lovers lapped up both his performance and the film.

It’s well known that Kartikeya’s next film will be produced by Kabali producer Kalaipuli S Thanu. Yesterday, on the eve of Kartikeya’s birthday, the makers revealed the film’s title ‘Hippie’ and its first look posters. Hippi, unlike RX 100, will be a light-hearted romantic comedy. Apparently, Kartikeya’s character in Hippi will be totally opposite to what he had played in RX 100.

Hippi will be made as a Tamil-Telugu bilingual and it will be directed by TN Krishna, who had earlier directed Suriya-Jyothika’s 2006 hit romantic drama, Nuvvu Nenu Prema. The project will go on the floors very soon. Stay tuned for more updates.