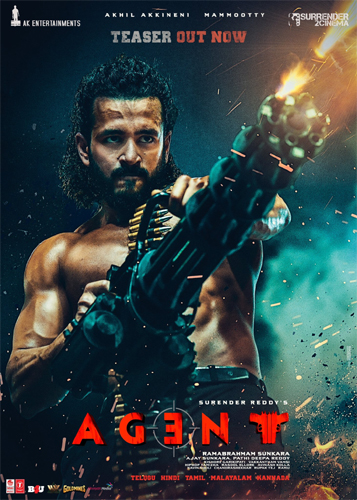 Akhil’s Agent is one of the most awaited films in recent times. Superstars Siva Karthikeyan and Kichcha Sudeep came together to launch the teaser of Agent in Tamil and Kannada, while Akhil and Mammootty did the honours of releasing the glimpse in Telugu and Malayalam respectively. The Hindi version teaser has also been dropped.

The teaser is cut and presented from the point of view of the head of the national security agency Mahadev, played by Mammootty. Called for an enquiry, he discloses the courage, valour and unpredictable nature of the ‘Agent’.

Slipping into the action-packed character and carrying off it in style, Akhil’s makeover is truly amazing. Sakshi Vaidya looks cool and pretty in a single sequence, wherein Mammootty is at his usual best.

The teaser is slick and stylish all along, thanks to the visualization of the maker Surender Reddy. Rasool Ellore captured the world of Agent strikingly.

Hip Hop Tamizha’s background score builds up the tension, besides giving rise to Akhil’s character. The production design of AK Entertainments and Surender 2 Cinema are cool.