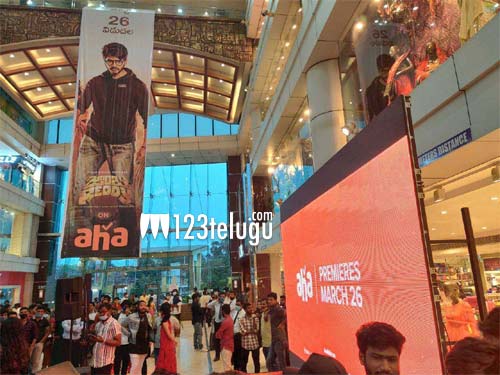 Normally, stars and technicians visit several cities and interact with fans before and after a film’s release. This creates a certain hype and expectations for the movie. But such kind of promotions are unheard of for a film during its OTT release.

But Aha, the exclusive Telugu OTT platform, has kick-started a new trend in promotions for OTT releases starting with the recently released zombie thriller, Zombie Reddy. In a never before feat, the film’s core cast and crew members recently interacted with movie lovers at a mall in Vizag. The promotions will head to several other cities in the twin Telugu states ahead of Zombie Reddy’s OTT release on March 26.

Vizag! ♥️
Thank you for the amazing response on our Zombie tour! We will see you next in Rajahmundry and Kakinada. #ZombieReddy March 26 nundi, mee @ahavideoIN lo😈 pic.twitter.com/ni1FR7rr6t