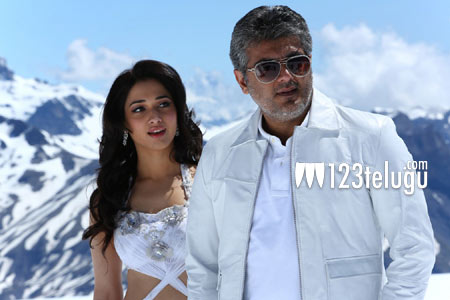 Thala Ajith’s mass action entertainer ‘Veeram’ is being dubbed into Telugu and this movie is going to be known as ‘Veerudokkade’ here. The Telugu rights of this project have been picked up by Omix Creations and arrangements are being made for an end January release.

Tamanna is the heroine in this movie and Devi Sri Prasad has composed the music. The Telugu songs will be released in the first week of January. Siva, who directed Daruvu in Telugu, is the director of this movie.

‘Veeram’ is expected to be an out and out commercial entertainer and Ajith’s look has received a great response from movie lovers. The prestigious Vijaya Productions banner has produced this movie and the Tamil version will hit the screens on January 10th 2014.