Akhanda has been praised by people all over the world: Nandamuri Balakrishna
Published on Mar 13, 2022 4:00 pm IST 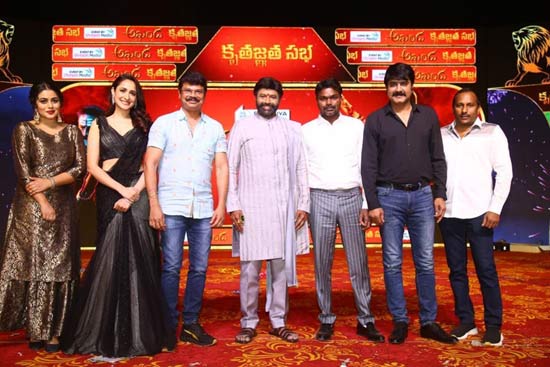 Nandamuri Balakrishna and Boyapati Srinu’s Akhanda is the first Telugu movie to become a big hit after the third wave of the pandemic. The movie also got a stunning long run and has completed 100 days run, a feat almost forgotten these days. So, the team celebrated the eve with a massive public event in Kurnool, Andhra Pradesh.

Speaking at the event, Balakrishna said, “It’s been many years since 100 days celebrations were held among these many people. When we started this film we did not think that it should be beyond Simha and Legend. Due to Corona, the shooting of this movie came to a halt for a few days. After its release, the audience and fans gave it a resounding success. Cinema is considered a necessity. My father’s films were thought-provoking and entertaining. The film Akhanda manages to entertain as well as informative. Whenever Nature, Dharma, and women face some danger, God enters into a man in some form and becomes the saviour.”

“Director Boyapati gave a good message conveyed through my character. Akhanda movie has been praised by people all over the world, not just Telugu people. I would like to express my gratitude to God for giving me Akhanda,” said the actor.

“Director just narrated me the bare-minimum line and I gave him the nod. He knows how to use an actor. This blockbuster movie has been running for hundred days in Koyilakuntla, Adoni, Yemmiganur, and Chilakaluripet. Having millions of fans is my fortune,” said Balayya.

He also said, “The credit of the success should also go to the writers. Thaman took the audience to another world with his music. My Fans are not just confined to movies, they do a lot of service to society. I would like to express my gratitude for that.”