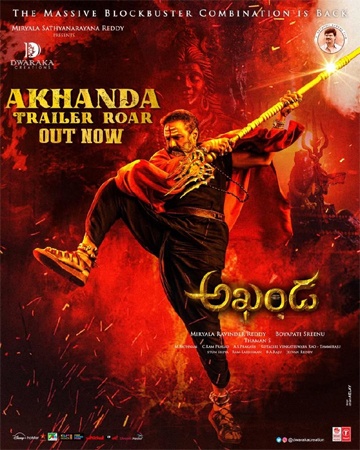 The most eagerly awaited theatrical trailer for Balakrishna and Boyapati Srinu’s hat-trick film, Akhanda, has been released just a while ago. The trailer is packed with Balayya’s trademark powerful punchlines and Boyapati’s ultra mass moments. On the whole, the trailer assures mass festival in cinemas.

Balayya stole the show in Akhanda’s trailer with his dual roles. Especially, the titular role of Akhanda is the major highlight of the trailer. Senior hero Srikanth has donned the main antagonist’s role and he looks menacing in a striking makeover. Boyapati’s grand making, the lavish production values and finally, Thaman’s rousing background score are the other highlights of the trailer.