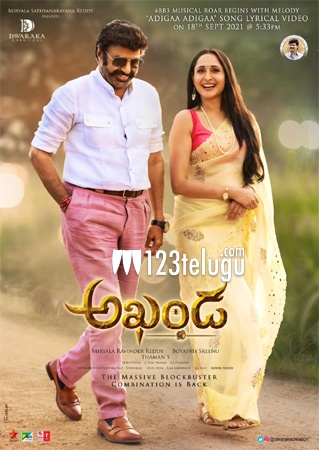 Here’s the much-awaited musical update on hero Balakrishna’s and Boyapati Srinu’s high budget action drama Akhanda. The makers of this highly-anticipated film are going to release the film’s first single tomorrow (September 18) at 5:33 PM. Composed by Thaman, the song is touted to be a melodious feast.

Akhanda’s final schedule will conclude in Goa. The makers will be canning a special song featuring Balayya and Pragya Jaiswal. Senior heroes Jagapathi Babu and Srikanth will be seen playing crucial roles in this Miriyala Ravinder Reddy production. The makers will be announcing the film’s release date soon.