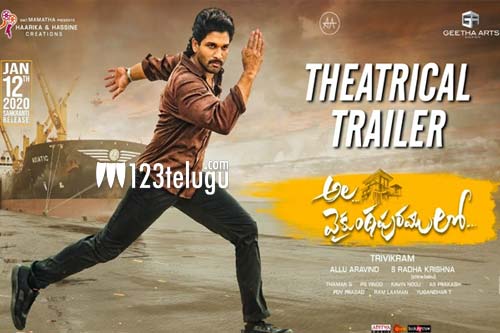 The much awaited trailer of Trivikram Srinivas, Allu Arjun’s Ala Vaikuntapuramulo was unveiled a little while ago at the grand pre-release event of the film. Although the trailer didn’t reveal much about the plot or theme of the film, Trivikram focused more on Allu Arjun’s attitude and mannerisms, and he completely stole the show.

Allu Arjun is introduced as a young man, who hails from a middle-class family and his father, Murali Sharma keeps reminding him that he has to live accordingly. And soon, the trailer cuts to Allu Arjun’s interaction with Tabu, Sachin Khedekar, Samuthirakani, Pooja Hegde, and Nivetha Pethuraj. There are plenty of vintage Trivikram’s lines throughout the trailer, and it will be interesting to see what other surprises the team has packed into the film.

The album, scored by Thaman, has already become a smash hit, and expectations are sky high on this family drama. The film is slated for release on January 12.