Ala Vaikunthapuramulo US distributors’ striking poster becomes a hot topic
Published on Oct 14, 2019 8:21 am IST 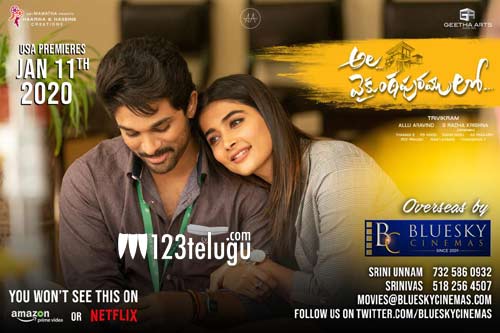 What’s striking about the poster is that the disclaimer that read “You won’t see this on Amazon Prime or Netflix”. Since then, amused fans are busy discussing about the poster. Of late, none of the biggies that were sold for astronomical prices managed to reach the break-even mark in the US.

One of the main reasons for this sad state of affairs is the digital premiere on OTT platforms within a month or 50 days of a film’s theatrical release. It looks like Ala Vaikunthapuramulo’s team is going to prevent its OTT partner from streaming the film within 2, 3 months of their film’s release.