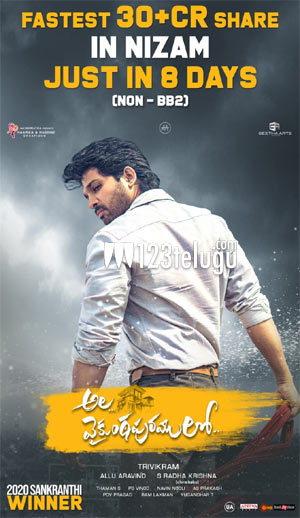 Allu Arjun and Trivikram’s Sankranthi blockbuster, Ala Vaikunthapurramuloo, is having a dream run at the cinemas worldwide. Especially, the film is all set to pull off a non-Baahubali feat in the Nizam region. On the other hand, ALVP has already become the highest grosser in Bunny’s career.

On Sunday, in Nizam, Ala Vaikunthapurramuloo collected a solid theatrical share of Rs 3.02 crore. With this, the film’s total Nizam share amounts to a humongous Rs 31.86 crore. This is the first Rs 30 crore film in Nizam for both Allu Arjun and Trivikram. The film is still performing strongly at the ticket windows in Nizam, and a Rs 40 crore full run share seems to be highly possible.