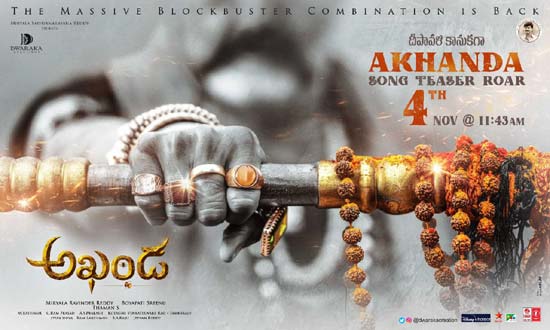 After the stupendous response for the teaser, the stage is all set for the launch of the title song teaser for Balakrishna and Boyapati Srinu’s Akhanda. The much-awaited teaser will be released tomorrow (Nov 4) at 11:43 AM. “Make way for Roaring #AkhandaTitleSong Teaser,” the makers announced and made the fans excited. The full lyrical video will be out on November 8.

In a solid feat, Akhanda’s mass and action-packed teaser has clocked over 57 million views so far. With sky-high expectations and excitement around the film and with the man in form Thaman at the helm, it’s needless to say that Akhanda’s title song will pack a punch on social media.

Also starring Pragya Jaiswal, Jagapathi Babu and Srikanth in lead roles, Akhanda is being produced by Miryala Ravinder Reddy under Dwaraka Creations banner. The makers are yet to come up with an official announcement on the film’s release date.