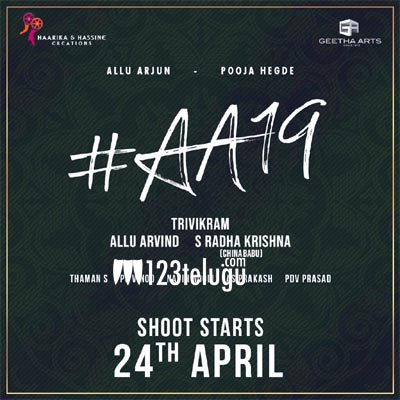 Fans of Allu Arjun and Trivikram are eagerly waiting for the duo’s third film after the successful Julayi and S/O Satyamurthy. Tentatively titled Alakananda, AA19 is currently underway in several places in Hyderabad.

Recently, there were reports that Allu Arjun wasn’t quite happy with the way the film’s production formalities are being carried out by producer Radha Krishna. The reports further speculated that the Stylish Star has even taken over the production responsibilities under his control.

However, sources close to the movie have denied these reports and said that Bunny is very happy with the proceedings and that all the necessary preparations have been done well in advance by Radha Krishna after discussing with Bunny’s father and AA19’s co-producer Allu Aravind.