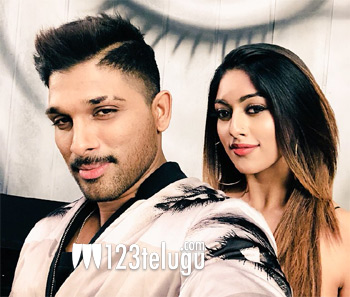 For the last few months, Allu Arjun has been busy working on his upcoming patriotic drama, Naa Peru Surya Naa Illu India. The film’s entire shooting formalities were completed last night and the Stylish Star took to Twitter to announce it and even posted a cool selfie along with his co-star Anu Emmanuel.

Bunny said that the first and the last thing Anu Emmanuel asked for was a selfie with him. “Soo Sweet. My First Personal Picture with my Actress Anu Emmanuel after the Last Shot of the shoot,” said the Stylish Star.

NPSNII is directed by Vakkantham Vamsi and produced jointly by Lagadapati Sireesha Sridhar and Bunny Vas in Naga Babu’s presentation. The film opens in cinemas on May 4.