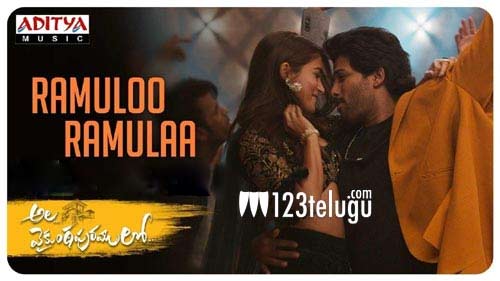 Within 24 hours, Ramuloo Ramulaa clocked over 8.3 million views on YouTube and became the most watched South Indian film song. And Allu Arjun is quite thrilled with the massive response. He took to Twitter and thanked his fans and even shared a cool poster. Meanwhile, Ramuloo Ramulaa has clocked nearly 10 million views and looks unstoppable.

Ala Vaikunthapuramulo is slated to release on January 12, as a Sankranthi festive treat. Pooja Hegde, Nivetha Pethuraj, Tabu, Navdeep and Sushanth will be seen in key roles in this Trivikram directorial.

MOST VIEWED SOUTH INDIAN SONG in 24 hours . THANK YOU ALL … for all the love . #AlaVaikunthapurramuloo #RamulooRamula pic.twitter.com/V0sKyNSx10