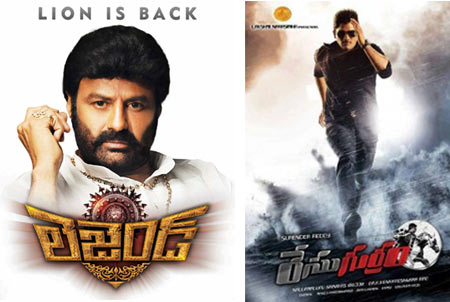 An interesting Box Office battle is on the cards this summer.As per a report being heard, Nandamuri Balakrishna and Stylish Star Allu Arjun might clash at the Box Office with ‘Legend ‘ and ‘Race Gurram’ respectively.

The production team of ‘Legend’ has already announced their intended release date as March 28th. Now, Allu Arjun’s ‘Race Gurram’ is also being considered for the same date and an official announcement might come soon. March 28th is a good date as it will officially open the profitable summer season for the Film Industry this year.

‘Race Gurram’ has Shruti Haasan as the heroine and Saloni will be seen as the second heroine. Surender Reddy is the director of the film. There is space for two big films to come out on March 28th, so if both films manage to come out on the same date, let us hope that both do well.