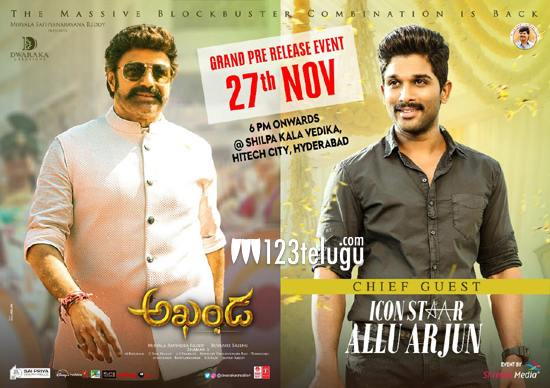 The makers of Balakrishna and Boyapati Srinu’s Akhanda have pulled off a major surprise. They have roped in hero Allu Arjun as the chief guest at Akhanda’s pre-release event. The grand gala event will be held on November 27 at Shilpakala Vedika in Hyderabad.

Akhanda has hero Srikanth playing the main antagonist, while Jagapathi Babu will also be seen in a crucial role. Pragya Jaiswal is the film’s leading lady and Poorna also essayed a key role. Miryala Ravinder Reddy has bankrolled this high budget entertainer under Dwaraka Creations banner. Thaman has scored music for the film, which is slated for its theatrical on December 2.