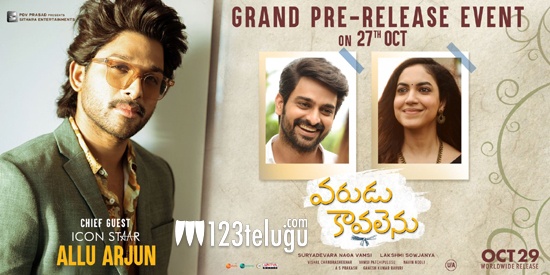 Young actors Naga Shaurya and Ritu Varma’s soon-to-release romantic entertainer, Varudu Kavalenu, has been creating a decent buzz thanks to the agressive promotions by its makers. A couple of days ago, actress Pooja Hegde graced the Varudu Kavalenu Sangeet promotional event.

Now, star hero Allu Arjun will be the chief guest at Varudu Kavalenu’s pre-release event which will be held on October 27th in Hyderabad. Needless to say, Allu Arjun’s presence will give a huge boost to the film just before its theatrical release.

Varudu Kavalenu is scheduled to open in cinemas worldwide on October 29. The film is produced by Naga Vamsi under Sithara Entertainments banner. Debutant Lakshmi Sowjanya has directed the movie and Vishal Chandrasekhar has composed the soundtrack.