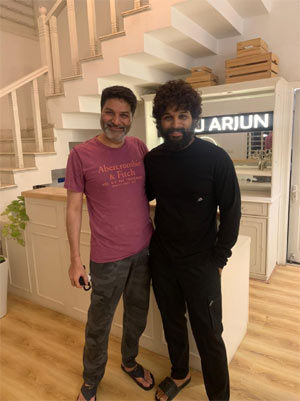 Released on this day, in 2012, Julayi marked the first ever collaboration between Tollywood’s star actor-director duo, Allu Arjun and Trivikram. Today is the film’s 9th anniversary and both Bunny and Trivikram met each other to celebrate this special day.

Julayi’s production house Haarika and Hassine Creations’ Twitter handle tweeted a picture of Allu Arjun and Trivikram posing with each other for a picture from their get-together. Bunny looked charming in a black sweatshirt and cargos and his thick beard for his Pushpa Raj role is the main highlight.