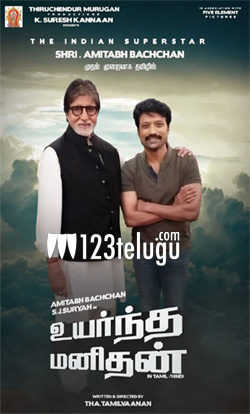 Legendary Bollywood star Amitabh Bachchan is currently acting in a handful of Bollywood projects. He will also be seen in Megastar Chiranjeevi’s Sye Raa, which marks his full-fledged debut in Tollywood. Now, the veteran actor is all set to make his Kollywood debut.

In his maiden Tamil-Hindi bilingual film, Amitabh Bachchan will be sharing screen space with popular actor-filmmaker SJ Suryah. The film is titled Uryandha Manithan. Tamilvaanan will be directing the movie and K Suresh Kannan will be bankrolling it. The film had its official launch this evening.